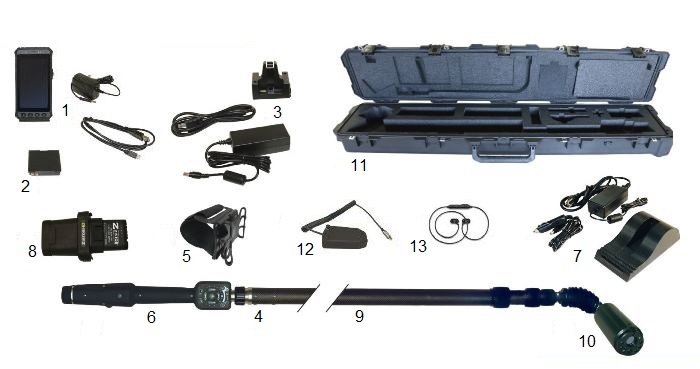 The HDTS-5AR-FC17-2.0D is a pole camera system with a dual mode thermal video camera head. The camera head, (THC-51D-HD), can output both a thermal video image and a standard IR illuminated B/W video image. The video mode can be dynamically switched by the user using the pole camera controls. Many systems that promote thermal imaging utilize a very low-resolution (80 x 120 pixels), thermal imager that gets married with the video from a standard video camera. This cannot offer the full benefit of thermal imaging as you require some level of illumination to get any usable detail in the thermal image. The Zistos system is designed with a true standalone thermal imager that generates thermal video at 320 x 240 resolution. The system’s main application is as a tactical surveillance tool that increases the safety and effectiveness of a tactical mission by providing visual intelligence in environments where it would be inaccessible, or dangerous to look unaided.

The system is a hand held pole camera that can transmit encrypted, low-latency (delay), thermal or low light B/W images using WiFi. The system also supports wired operation in situations where wireless operation is not feasible. The images are viewed on to a rugged 5” tablet. The tablet features a removable battery that is hot-swappable. This negates the need to take the tablet out of service if its battery gets low. The tablet can be worn on the wrist, chest or can be pole mounted at the user’s option. It is configured with a pole mounted camera that telescopes out to yield a length of 17’ including the handle.  The camera is positioned manually utilizing a friction hinge that allows the camera to be situated +/- 120 degrees from the straight-ahead center position. The design of the hinge will hold the camera orientation after it is positioned by the operator. The 5” tablet display was selected for this system features a rugged, industrial design, excellent screen brightness and resolution. It also has a removable SD card that can be removed to archive captured images and video clips. It also features a hot-swappable battery that can be changed during use.

This hand-held pole camera system and display can be used as a tactical surveillance tool to increase the safety and effectiveness of a tactical mission. The system allows operators to see into areas that may harbor an unknown and hidden danger using a low light camera that has integral IR LED illumination invisible to the human eye. The system output can also output a true thermal image by manipulating the controls. This offers the benefits of thermal imaging for detecting the presence of a human from images of body heat and can also provide additional detail on the individual and environment that may be missed when using thermal imaging exclusively.  The modular design is ruggedly built and compatible with many other Zistos specialty cameras such as low-light, under-door, and IR illuminated zoom cameras.