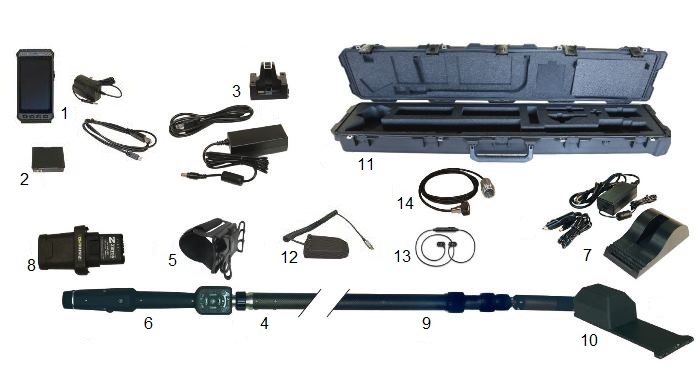 The HDTS-5AR-ZDV is a pole camera system with an IR illuminated dual view under door camera mounted on a specially designed universal joint pole. The system’s main application is as a tactical surveillance tool that increases the safety and effectiveness of a tactical mission by providing visual intelligence from underneath a door.

The system is a hand held pole camera that can transmit encrypted, low-latency (delay), WiFi images that are viewed on to a rugged 5” tablet. The system also supports wired operation in situations where wireless operation is not feasible. The tablet features a removable battery that is hot-swappable. This negates the need to take the tablet out of service if its battery gets low. The tablet can be worn on the wrist, chest or can be pole mounted at the user’s option. This specially configured system has a dedicated pole with mounted camera that telescopes out to yield a length of 8’ including the handle and that pole has a universal joint on the camera end. This universal joint allows for a full horizontal pan of the room while remaining outside of the fatal funnel of the doorway. The system also comes with a 6ft drop cable for longer, static surveillance missions. The 5” tablet display was selected for this system features a rugged, industrial design, excellent screen brightness and resolution. It also has a removable SD card that can be removed to archive captured images and video clips.

This hand-held pole camera system and display can be used as a tactical surveillance tool to increase the safety and effectiveness of a tactical mission. The system allows operators to see into a room, under a door, that may harbor an unknown and hidden danger, a barricaded subject or a hostage situation using the dual view under door camera. This camera actually has 2 cameras within, one to look forward into the room and one to look back up at the door while only needing a 1/4” (6.4mm) door-to-floor clearance. The ZDV-HD camera has integral IR LED illuminators invisible to the human eye, so you can see but can’t be seen as well as an integrated microphone to also gain audio intelligence. The modular design is ruggedly built and compatible with many other Zistos specialty cameras such as thermal, low-light and IR illuminated zoom cameras.

The system is ideally suited for looking into a room, under a door, to provide visual & audio intelligence on a room and status of a suspect or situation.